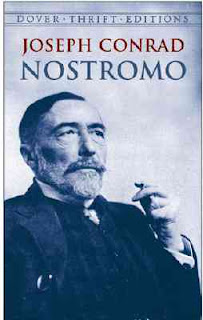 I came to see my book, though nonfiction, as following the pattern set by Nostromo, an epic tale of business, politics, war, and adventures at sea, populated by an enormous range of characters, each with his or her own agenda and impulses. I didn't try to mimic Conrad, of course, but I wanted to capture some of the qualities that make Nostromo such a treat for me. After all, they say that writers ultimately write their books for themselves. If they didn't, then writing would seem like working for a living. Read More
Be the first to comment

Some of these books included essential information, of course. I'm thinking, for example, of James McPherson's Battle Cry of Freedom, his splendid one-volume history of the Civil War era, or Maury Klein's The Life and Legend of Jay Gould. But I'm not speaking at the moment of sources, but rather literary influences. McPherson combines narrative momentum, contextual discussions, and character sketches in such a marvelous manner that (as one reviewer put it) you read this book rather breathlessly, as if you don't know how it will all come out. Klein's elegant work matches tremendous research and scholarship with crystal-clear explanations of business matters and, again, a brisk narrative pace. He balances Gould's private and business lives wonderfully, creating a real model for a biography of a business figure.

In the realm of nonfiction, Robert Caro, too, sets the standard. I read Master of the Senate when I was writing The First Tycoon, and I was overwhelmed by his ability to create real, believable characters from his research. More than that, he brings to life secondary characters, an overlooked component in many biographies, so that the reader clearly sees the interplay of egos, emotions, and agendas in Lyndon Johnson's life.

I believe in reading fiction as nourishment for my writing. I've written elsewhere of Tolstoy's riches, so visible in his two giant novels. Let me add here that Conrad is a favorite as well. I re-read Nostromo when writing The First Tycoon. It almost seems to be a fictionalization of Vanderbilt's Nicaragua venture, for one thing. For another, it, too, creates a rich, believable world, immersing the reader in seemingly real people, scenes, places, businesses, and cultures. The fast-paced plot and the range of characters (from the stevedore Nostromo to political kingpins to a San Francisco financier) inspired me.

Stay tuned for more. Read More
Be the first to comment

As Seen On TV

Tags: The First Tycoon, Corneluis Vanderbilt, Commodore Vanderbilt, T.J. Stiles, C-SPAN, BookTV
I've had a very busy spring, with Vintage's publication of the paperback edition of The First Tycoon and requests for public speaking. So allow me to direct your attention to my Media Center page on this website. There I'm posting audio and video clips of my public appearances.

Most recently, I appeared at the Printer's Row Lit Fest in Chicago. Even though I was born in the country, I love great cities, and Chicago is one of the greatest. My only regret is that I wasn't able to stay in town longer, and enjoy the festival (and the rest of the town) for myself.

You can watch a clip of my 45-minute talk/conversation on C-SPAN's BookTV website, here: http://www.c-spanarchives.org/program/294033-8. And don't forget to check out my Media Center page for other interviews or talks. Read More
Be the first to comment

You can listen to it here.
Be the first to comment

I'm flabbergasted—overjoyed, stunned, and humbled all at once. Yes, humbled, corny as that sounds. I'll be honest: I try my best to write at a level that would merit this kind of recognition, so this honor is a dream come true. But I really do believe in publishing a book with all humility, and this only drives that point home. There are hundreds of fine nonfiction books being published this year, and dozens that merit serious consideration for a national prize. Being singled out is a gift, plain and simple.
Read More
Be the first to comment

Talk at the Miller Center

The Optical Illusion of a Big Biography

Recently two very different reviews appeared of my book. The contrast between them says a lot about the optical illusion that the size of a biography can create.

One is in Foreign Affairs, by noted writer and critic Walter Russell Mead. I'm happy to say it's very positive. Mead has good things to say about my "ability to integrate economic, technological, intellectual, and political history."

The other is in the Anniston Star, by Alsie White, "grandmother and an avid book reader". For the history presented in this book, her reaction was: "Yawn!" According to Ms. White, "We learn very little about the private man."

I naturally prefer Mr. Mead's view, but Ms. White's reaction to the book is worth paying attention to, because she's also a reader, like many others. I'm not writing this to beat up on her. My point, rather, is that she formed a false impression, thanks to a sort of optical illusion.

There will likely be a better book published someday about Commodore Vanderbilt, but it will probably be a while before we see more information about "the private man." I found far more than I ever imagined I would (as he left no papers), and his private story is woven throughout every chapter of the book. But, to Ms. White, it feels like there isn't much, because this is a biography that pays a great deal of attention to the historical context. I wasn't content to just write about what he said and did; I wanted to understand (and explain) why he was significant.

All that other material, I hope, makes my book more interesting and important than it otherwise would be. Walter Russell Mead thought so, which is highly gratifying. For him, my approach worked.

For Ms. White, the proportion of space devoted to contextual description, to my reflections and analysis, created the misleading impression that the absolute quantity of personal information is small. It isn't.

Does that mean that everyone must read and like my book? Of course not. It wasn't the book Ms. White was hoping for, and that's perfectly fine—happens to all of us. But her very desire for one element of the book ironically made it seem like there wasn't much of it, because it was embedded in another element that she didn't want. Funny how that works.
Read More
Post a comment

I've read that, in certain works of fiction, a city can be as much a character as any person in the story. Certainly cities and localities have played much the same role in my biographies.

In Jesse James: Last Rebel of the Civil War, for example, rural western Missouri emerges as a living, changing thing, as essential to Jesse James's story as his mother or brother Frank. And, in The First Tycoon: The Epic Life of Cornelius Vanderbilt, I tried to tell the story of the emergence of two great American cities: San Francisco and, in particular, New York.

Without New York, Commodore Vanderbilt never would have achieved the staggering success that marked his career. And without Vanderbilt, New York would have had a harder time clawing its way to the top. I tried to give the full flavor of the city as it changed in the nineteenth century: it went from being "an overgrown seaport village" (as a Scottish visitor called it, before the War of 1812)—rife with herds of roaming pigs and packs of wild dogs, with backyard privies and yellow fever epidemics—to an island of tenements and factories, mansions and banks.

As I see the story (and tried to write it), Vanderbilt and New York grew up together. He took on the aristocratic, landowning merchants who presided over the "culture of deference" in the early nineteenth century, championing an individualistic, commercial, competitive culture that came to define American society. And he went on to inaugurate the Gilded Age, with the vast polarization of wealth between himself (along with a handful of other super-rich New Yorkers) and the desperately poor, who lived a short distance from his Washington Square mansion, crowded into decrepit housing in Five Points and other slums. It's a story both exhilarating and hearbreaking, much like New York itself.

Vanderbilt also played a central role in the birth of San Francisco. More than a decade before the completion of the transcontinental railroad—and half a century before the Panama Canal was begun—he ran a steamship line between San Francisco and New York, with a land crossing at Nicaragua. By lowering fares and speeding up service, he promoted migration to California, and magnified the impact of the gold-rush gold in the financial system headquartered in New York. Though he never set foot in San Francisco, he became a major presence there, praised and condemned in newspaper editorials and sidewalk conversations on Market Street. The character of early San Francisco—a city of hustlers and con artists, of schemers and quick-to-shoot miners—shaped a major part of Vanderbilt's own life, and I tried to bring it out in all its brilliant colors.

Though Vanderbilt's greatest corporation, the New York Central & Hudson River Railroad, is long gone, the infrastructure he built has left a lasting mark on New York. His massive St. John's Park freight depot (where the exit of the Holland Tunnel is now) reshaped lower Manhattan, giving it the particular character it has today, with its massive nineteenth-century warehouses. He constructed the original Grand Central, which anchored Midtown, and made 42nd Street into a grand crosstown artery. He sank the railroad tracks that led to Grand Central beneath the surface of 4th Avenue, allowing it to blossom into Park Avenue. And he helped to make Wall Street the most important and sophisticated financial market in the world.

For good reason his statue remains outside of Grand Central Terminal today, looking south toward Wall Street. In many ways, he made the modern city, and with it the modern economy of the United States.
Read More
Be the first to comment