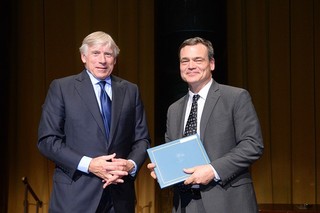 "Epic, ambitious, bursting-at-the-seams. . . . Scrupulously avoids caricature. . . . A particular highlight of Mr. Stiles's work is its focus on the women in Custer's life. . . . Mr. Stiles's accomplishment is to show that, within the context of Custer's life, the Battle of the Little Bighorn really was an epilogue."
—Randall Fuller, Wall Street Journal

"If anyone could make a reader forget Custer's last stand, at least for a few hundred pages at a time, it would be T. J. Stiles. . . . Stiles is a serious and accomplished biographer, but he is more than that. He is a skilled writer, with the rare ability to take years of far-ranging research and boil it down until he has a story that is illuminating and, at its best, captivating."
—Candice Millard, New York Times Book Review

From the Pulitzer Prize and National Book Award winner, a brilliant new biography of George Armstrong Custer that radically changes our view of the man and his turbulent times.

In this magisterial biography, T. J. Stiles paints a portrait of Custer both deeply personal and sweeping in scope, proving how much of Custer’s legacy has been ignored. He demolishes Custer’s historical caricature, revealing a volatile, contradictory, intense person—capable yet insecure, intelligent yet bigoted, passionate yet self-destructive, a romantic individualist at odds with the institution of the military (he was court-martialed twice in six years).

The key to understanding Custer, Stiles writes, is that he lived on a frontier in time. In the Civil War, the West, and many areas overlooked in previous biographies, Custer helped to create modern America, but he could never adapt to it. He freed countless slaves, yet rejected new civil rights laws. He proved his heroism, but missed the dark reality of war for so many others; a talented combat leader, he struggled as a manager in the West.

He tried to make a fortune on Wall Street, yet never connected with the new corporate economy. Native Americans fascinated him, but he could not see them as fully human. A popular writer, he remained apart from Ambrose Bierce, Mark Twain, and other rising intellectuals. During Custer’s lifetime, Americans saw their world remade. His admirers saw him as the embodiment of the nation’s gallant youth, of all that they were losing; his detractors despised him for resisting a more complex and promising future.

Intimate, dramatic, and provocative, this biography captures the larger story of the changing nation in Custer's tumultuous marriage to his highly educated wife, Libbie, their complicated relationship with Eliza Brown, the forceful black woman who ran their household, as well as his battles and expeditions. It casts surprising new light on a near-mythic American figure, a man both widely known and little understood.

"Custer's Trials is exemplary in every way, replete with instances of detailed scholarship and compelling analysis, dense with psychological insight, and written in a tight, adroit style."
—Wichita Eagle

"A rich, subtle, and persuasive narrative of a compelling figure who was fortune's child during an era of exploding American growth. Stiles has written a marvel of a book—the best life of Custer right up to the moment he marched the 7th Cavalry out of Fort Abraham Lincoln while the band played 'The Girl I Left Behind Me,' on their way to whip the Indians."
—Thomas Powers, author of The Killing of Crazy Horse

"T.J. Stiles has written another splendid book. . . . This biography easily overshadows its many predecessors, offering new facts and interpretations as well as a wonderful read."
—Robert Utley, author of Cavalier in Buckskin: George Armstrong Custer and the Western Military Frontier

_________________
A Custer Gallery: Photographs illustrating Custer's life that did not make it into the book
Click on the image to see it at full size.
Source: the Library of Congress

From West Point to Bull Run

Cadets at West Point, the United States Military Academy. Custer graduated last in his class in 1861.

A view of West Point (on right) from across the Hudson River, 1853.

Washington, D.C., in early 1861. Custer passed through Washington on his way to Bull Run.

First Bull Run, called First Manassas by the Confederates. Custer was present but did not engage in combat.

In early 1862, Maj. Gen. George B. McClellan launched the Peninsula Campaign, transferring the Army of the Potomac by sea to the tip of the peninsula east of Richmond, the Confederate capital. This image shows a wagon park and a glimpse of the many ships involved in this vast operation. 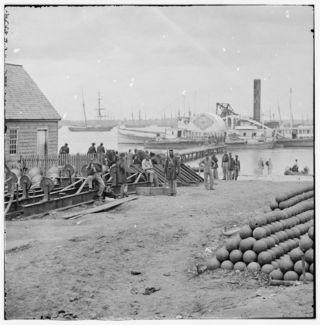 A Union steamer docked on the shore of the Peninsula. 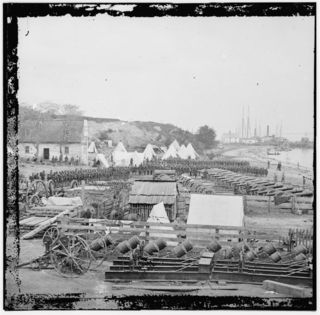 This vast Union artillery park illustrates the scale of the Peninsula Campaign, and the industrial and military mobilization of the North.

Custer searched for a rebel battery on the Peninsula. He found it. It fired on him. The shell overshot Custer and maimed an engineer to his rear. This is likely the same battery. 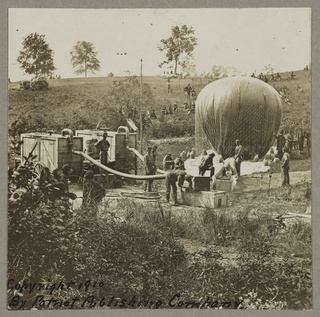 Custer often observed enemy lines from an observation balloon invented by Thaddeus Lowe, making him one of the very few human beings in history, to his time, to have gone aloft. This photograph, taken near Gaines's Mill, Virginia (also called Gaines Mill), shows a balloon being filled with hydrogen by the machine Lowe invented.

Custer poses outside his tent on the Peninsula with one of the many dogs he owned over his lifetime.

Custer's heroics in a raid across the Chickahominy River led Gen. McClellan to appoint him to his staff (other members are shown here). Custer idolized McClellan.

Patrician Americans and foreign nobility populated McClellan's staff. Included in this photo are three French aristocrats, including the Prince de Joinville, who wrote that he formed a very high opinion of Custer early on in the war, and was proud of what he accomplished.

Escaped slaves on the Peninsula. Enslaved people seized opportunities for freedom as Union armies advanced, flocking to federal lines. Though abolition of slavery was not one of the original Union war aims, the U.S. Army refused to return them on the theory that they were "contraband of war"; inevitably they were called "Contrabands." Their flight greatly weakened the rebel cause; one historian calls it the greatest slave rebellion in history. But they flummoxed McClellan, who wanted nothing to do with ending slavery. Custer shared McClellan's views, which were much like his own father's, but he struggled at various points with his bigotry, particularly after it was challenged by a young black woman who entered his life after Gettysburg—and as he cultivated Republican congressmen.

A stereoscopic image of a federal artillery battery near Fair Oaks, where a major battle was fought.

The Grapevine Bridge over the Chickahominy River played a critical role in saving the Union army at Fair Oaks (called Seven Pines by the Confederates).

Lincoln and Gen. McClellan. A skilled organizer, McClellan was extremely cautious in his operations. On the Peninsula, he recoiled from Richmond and retreated when Robert E. Lee attacked him, giving the Confederacy a strategic victory even though the Union won all but one of the Seven Days' Battles. By contrast, he took grave risks in politics, intriguing with the political opposition, encouraging newspaper editors to write stories critical of the administration, and railing against Lincoln as a "gorilla" and a "baboon." His staff talked about marching on Washington.

From the Confederate Surrender to the Little Bighorn

In November 1868, Custer returned from nearly a year's suspension from rank and pay—his sentence after being convicted by a court-martial—and led the 7th Cavalry in an attack on the Southern Cheyennes. He followed the trail of a war party through deep snow, hoping to strike the Cheyennes while their ponies were weak from lack of forage and their mobility was limited.

On November 27, 1868, Custer surrounded a village at the end of the trail of the Cheyenne war party. He signaled the attack by ordering his band to play "Garry Owen." The surprise attack fell on a band led by Black Kettle, the leading Southern Cheyenne advocate for peace and accommodation. Many women and children died in the attack. Custer did not target them, but tried to save them. He did, however, see to it that all males of fighting age who fell into his hands were killed. He brought back no adult male prisoners. The battle was also costly. Major Joel Elliott led a detachment in pursuit of some escaping Cheyennes, and was surrounded by warriors riding up from a far larger village downstream on the Washita. The battle rescued Custer's career, but left him permanently surrounded by controversy. He killed a man of peace, along with women and children, and lost a large detachment of men, whose bodies Custer left behind as he tried to escape the large number of fighting men from the larger village. 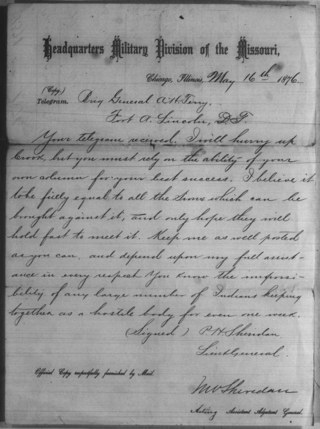 The last message from General Philip Sheridan, commander of the Military Division of the Mississippi, to Gen. Alfred Terry, Custer's superior and department commander. Though this page of instructions does not by itself explain the Little Bighorn, it does show that no one in the army suspected that Custer would face overwhelming numbers when he encountered the Lakotas and Cheyennes. Indeed, Sheridan hoped that Custer would strike a particularly large body. He did, of course, to Custer's misfortune. 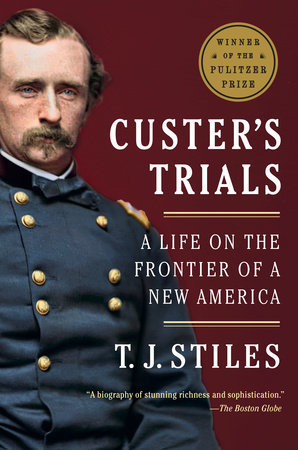